A rare lull in generation provided an opportunity for a morning’s fishing on the North Fork River below Norfork Dam.  Having picked the boys up at camp near Branson a day earlier, we bivouacked in Mountain Home, and headed to Quarry Park on Saturday morning.  The boys were still recovering from their camp experiences, so an early day was not possible, even though I knew our best chances would be before 9 a.m.  Sometimes you make do.  Our first visit was to Dry Run Creek, for Hank, the youngest, to try his luck on this outstanding fishery.  Designed for children under 16 to learn to read water and entice trout to take a fly, the creek is a magical place.  We found the flow rate rather high, but determined to do our best, began to work a favorite pool that has produced consistently for years.  A variety of trout could be seen holding throughout the pool and the emptying run. 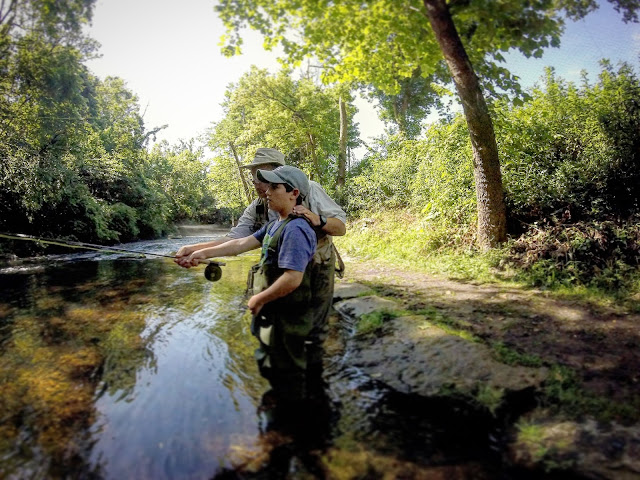 We prepared Hank with a smallish Sow Bug and a strike indicator, and soon he was casting across the current and working the drift.  These are tight quarters, and on more than one occasion a leaf or limb was the victim of an errant cast.  Overall, he was able to make several good casts and execute a proper drift.  Cast, mend, drift, repeat.  These trout, holding in the current, barely sniffed at his fly, and several actually moved to avoid it as it drifted downstream!  We noticed a couple of larger fish working against the far bank, but neither seemed interested in our offerings.  Perhaps they’d been up early feeding, and we had not.

It was already a hot day, though down by the creek it was not quite so bad.  We wanted to try the river, just across the parking lot from Dry Run, so Hank secured his gear and we headed back to the truck.

On the North Fork River we found, as promised, that generation was non-existant, with only the minimum flow water coursing from the dam.  By now we were all in waders. Entering near the Quarry boat ramp, we began to trek downstream to find space to fish.  There were a number of folks on the river, but few were fly fishing.   Luke, fresh out of high school and headed to study engineering as a Razorback this fall, tied on an olive Wooly Bugger, and began to drift and strip it back, through the deeper run against the far bank that held the most current.  I chose to drift a Sow Bug in a bit shallower water, so as to gauge the location and appetite of the fish.   We both had some interest from a few fish, but the action was slow and the fish seemed sluggish, probably from the heat.  Hank stood nearby, and I had hopes of handing off the rod once a fish was on.  As is typical of middle schoolers, he soon lost interest in my casting, and, taking my wading staff, began to explore the shallows around the near bank.  Of course, once he was some distance away, a nice rainbow decided my Sow Bug was the chosen one, and I had a fish on!  After several nice runs, he came to the net, and Luke used the GoPro Hero to record the moment. 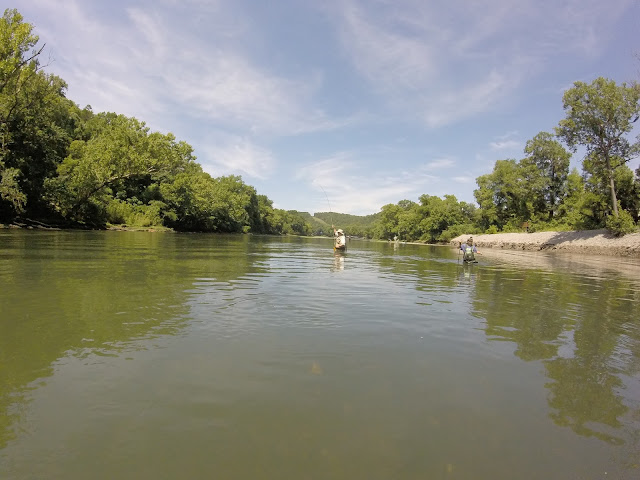 By noon, the flow in the river had slowed, likely due to increasing generation on the White River just a few miles downstream, and we had miles to go - and a waiting mother hen who was ready to see her chicks after their week at camp.

It’s hard to have a bad day on the White River system, and today was no exception. A lack of fish was far overcome by father and son time, and the beauty and serenity of the North Fork.
Posted by Trent Fleming at 12:57 PM