Note:  This is transcribed from a (Memphis) Commercial Appeal article from early 1930s.  The clippings I have do not have a year, although the date was August 26.  So based on F.A.'s age I'm going to guess 1931 or 32. I have maintained the language and sub headings as much as possible from the original article.

F. A. is my paternal Great Grandfather.  In his lineage, which I've been able to trace back to London in the 1500s, are Captain Thomas Ashby (my 8th Great Grandfather) who was a revolutionary war hero, and was given land near Winchester, Virginia for his service (the area is still called Ashby's Gap today.)  One of his sons, Robert Ashby rode with Washington during that war, as well.  Finally, Turner Ashby a great great uncle of F.A. served under Stonewall Jackson in the War of Northern Aggression.  But F.A. was vitally important to the founding of my home town, Marked Tree, Arkansas, and that is what this story is about.  He came to the area in 1888.  Today, my Aunt, who is the widow of my father's brother, is the only one from the Ashby/Fleming family left in Marked Tree.    The clippings I have are too weak in quality for the picture to show up, so I'm including a formal photo I have of F. A. - 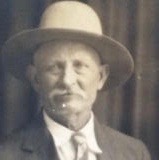 “F.A. Ashby, who began logging career at the age of 10, never had any trouble because he let ‘em know who was boss”

Written by Esther Bindursky, Special to the Commercial Appeal

The unfathomable lure of the river - and after 65 years of work running logs and around timber camps. F. A. Ashby, 76, veteran woodsman of Marked Tree, finds it still enthralling.  He has just rounded out 35 years for Chapman-Dewey, as river foreman.

“I never had any trouble with ‘timber-jacks’ on the river; I just always let them know first who was boss,” and his blue eyes twinkled.

Ashby began his logging career at the age of 10 around Dewitt, MO; at the age when most lads were still being coddled, Ashby was running to the logging camps with his father, “laying chains” for the loggers.

SAW JAMES BROTHERS
“It was many a time that Jessie or Frank James would ride up to our home in Carroll County, Missouri.  They lived only a short distance from us.  They would stop for a glass of water, chat a while, and be on their way.  Their reputation wasn’t so bad then.  I remember the last time I saw them and Tom Ford.  I was in the woods and heard some galloping horses.  Pretty soon they came into view.  There were three men on horseback, Jessie and Frank James, and Tom Ford.  They plunged their horses into the Missouri River and swam across, quickly disappearing into the woods.”

His love for river work has led him into many strange tracts of land.  In 1885, he “run” logs to Jefferson City for Sullivan and Hays.  Later he worked for Chapman and Dewey as its foreman in Missouri, running logs down the Missouri River, east of Kansas City, a distance of three hundred miles to Horse Creek, on the edge of Broadway, into St. Louis.  For a while he succumbed to the lure of the huge Washington forests, and trekked out to Seattle to run logs down the Snohomish River, but soon “chucked” it and turned eastward again, arriving in Marked Tree about 1888.

PICNIC BIG EVENT
Down in Ashby Grove on the outskirts of Marked Tree, where the Little River with its inveigling crooks and bends flows to the left, and the turbulent St. Francis runs to the right, his home sits with a “stones throw” of the two rivers. (local folks will recognize this area as Pumpkin Bend, alongside and across the highway from the old Federal Compress)

His reputation as an expert hunter has led many a sportsman to his door for directions to the right place to kill ducks and geese, the right nook to catch the elusive bass and crappie.

In a little pen on the bank of the St. Francis he has a bunch of wild geese that he is raising for decoys.  A cabin motor boat that he built himself is moored to the landing on the St. Francis, was dexterously set adrift and a ride up and down the St. Francis revealed his skill as a pilot.

KNOWS LOTS OF PERSONS
Past houseboats and fishermen shacks he sped, callout out a cheery greeting to everyone “Hi! Mr. Ashby! How’s the olde river, is she falling? Fish biting pretty good this morning, you better try your luck!” shouted friends along the river.

"A feller gets to know a lot of people after so many years of this kind of work.  I’ve come in contact with all kinds of them, from the lowest greaser, to the highest type timber man, but they’re all alike nearly in one respect, treat ‘em square and nine times out of out ten they’ll play square.”

"The tightest spot I ever got into was on Right Hand Chute one day.  I heard about a feller stealing our timber up there.  I got in my boat and went up there, but found out I had left my gun and didn’t’ even have a pocket knife with me.  I crept up to where I heard the chopping and laid in wait.”

"Pretty soon I spoke up: you’re on the wrong side of the line, bud, in your chopping, but Chapman-Dewey appreciates the work you’ve done for them; you’ve done quite a nice little job.  Now, if you’ll just drop that ax and be on your way, we’ll call it a day”

He marched away with his hands up.