Catching trout on a fly is fun, regardless of the size or species.  As with any pursuit, once one gets the basics down, there are often areas of specialization to explore.  Some fly fishers focus on stalking larger fish, often enduring days on the water without a fish, using techniques designed to lure the very largest fish from their lairs.  In many regions, this most often means Brown trout, and night fishing.  While some trips result in fish, all of them result in learning. 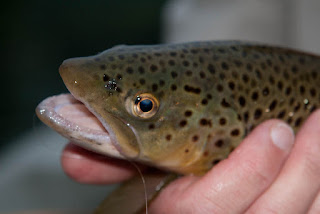 One key to understanding trout, especially big ones, is their tendency toward conserving energy.  This impacts where they hang out, what they eat, and how they eat.  They will not fight the current when ready shelter is close by.  They will choose larger prey as it provides more protein per portion. Let’s look at food, habits, and shelter to increase our chances of taking a larger fish.

What will Browns eat? Of course, the range of aquatic insects remains in play at all stages, but the small size of most insects makes them problematic for larger fish.  The venerable sowbug deserves its reputation as a trout food, and is a great fly for nymphing.  Many an observant angler has seen a larger Brown ramming into a matt of weeds or moss to dislodge multiple sowbugs to gorge on.  Terrestrials are also sought after food sources, though again, size matters.  Ants, hoppers, and the periodic hatch of “katydids” (cicada) are sought after by trout. They will eat smaller fish, including those of their own species, as well as leeches, a favorite food of many other large fish, including Largemouth Bass.  The crawfish pattern, often used for Smallmouth Bass, will regularly catch trout, which may say something about the extent to which they are also trout food.  The largest fish will also eat small rodents, and by some accounts, even small birds or fowl, given the opportunity. No doubt the amount of protein offered here is attractive. Because trout hunt as much by feel as by sight, fishing for them successfully requires a lure that will move water ahead of it, activating lateral line sensors and attracting fish.  Sensitivity to motion and pressure waves also means you want to minimize wading and movement once you begin fishing.

Let’s translate these food preferences into what to fish with.   I’m a creature of habit.  Forced to pick a fly, I will pick a woolly bugger first, as you’ve seen in my writing by now.  When probing for larger fish, I’m going to tie on a larger fly, size 6 or larger, using olive drab or lighter during the day, and black at night.  While larger fish may often take a smaller offering, there is a point at which smaller fish will shy away from larger flies.  So an important concept for me is to fish with a larger fly to discourage smaller trout.  I like a beadhead because of the extra weight.  I believe it is worth it to use a sinking tip line instead of split shot, as I generally don’t like the way split shot makes me cast (we all need something to blame poor technique, on, right?) but I know that under some conditions, a split shot or two is invaluable, especially in helping your fly to stay close to the bottom as you try to bump a fly through deeper water.  My woolly bugger technique is simple, drift and strip back.  The rate and speed of the strip is varied in order to cover more water: slower for deeper, faster as you attempt to work the middle and top of the water column.
Larger, even oversized terrestrials are also useful, at the right time of the year.  Most often, these are fished on top, with the plop of the fly on the water serving as a dinner bell for feeding trout. This is typically the fall, when water is low and the weather has been dry, but of course the cicada hatch brings its own action when it occurs.  Observing the stream and fish activity prior to fishing is an important step in selecting the right fly.    Mouse patterns are often used for larger fish, and while Browns are notorious for eating rodents, Rainbows and other trout may also partake, given the opportunity.  Hard to prevent this, but enjoy the take and the fight no matter what species “takes the bait.”  A good mouse pattern is lobbed over a likely spot and skated back to you in order to simulate a swimming motion.  High sticking works well, as the tight line allows you to not only stay near the surface, but to impart some side to side motion.  You might practice this in a pond or back yard pool before hitting the water, in order to observe and critique your efforts.  Finally, you could choose a fish pattern, the various streamer and minnow concoctions that seek to mimic the younger of the the species.  A number of anglers use a “drop jaw” streamer that produces a larger wake in front of the fly.  I fish these similar to a woolly bugger, drifting and stripping at various levels of the water column to ensure that I’m reaching all areas that might hold fish.

Where are the large trout? Trout will choose the portion of the water column that best protects them from predators, in addition to providing a suitable hunting ground.  Too often, anglers focus on the surface . . . the speed and direction of the current, actively feeding fish, seams that indicate changes or confluence of current, and visible structure including logs or rocks.  These are important, but are only the start of effectively reading the water.  Just below the surface, conditions can be quite different.  Water may move more slowly, (which might mean that your strike indicator is dragging that nymph along at an unrealistic rate) and there may be fish cover that, while harder to see, directly impacts the feeding habits of fish. Consider large rocks or boulders in the stream.  Those that emerge out of the water are easy - you know that they provide a lee side where fish can hold out of the current, watching for food, and easily slip out to feed, and return to less turbulent water.  Drifting the right fly past that rock is often an effective tool for catching fish.  But what if there’s a boulder there that you can’t see?  Perhaps only two to three feet above the bottom, it provides the same shelter from the current, in a much calmer environment, where the trout is not exposed to predators like birds of prey.  This is how trout grow old and big.

Along the bank is another opportunity for larger trout habitat.  The overhang and vegetation that may exist there, including the occasional tree or large branch that has fallen into the water, provides desirable cover.  Again, using our theory of conservation, we can assume that fish would prefer to hold along the bank where there may be slack water, rather than in the middle of the stream.  This is especially true when the dams on our beloved tail waters are called into service for producing electricity and water levels are up and fast.  In this case, casting streamers or mouse patterns into the bank and stripping them back will often bring fish to the fly in spectacular fashion.

The limb or tree that has fallen into the water brings additional opportunities for those seeking large trout, as there is not only cover at the surface, but likely branches extending downward into the water, perhaps far enough to provide shelter for larger fish who are sifting the current for food.  Care is needed here, and perhaps a stripping approach, as too much drifting near these deadfalls will result in your contributing another bauble to adorn the branches.

Man made structures can also be holding spots for larger fish, including bridge footings, extended aprons of boat ramps, and even boat docks that have been in place for a period of time.  Of course, access to these may require a boat, rather than wading, except in periods of low water.  Treat these structures as you would boulders or branches.  They will provide cover and protection from current, attracting fish seeking to minimize effort and maximize protein intake.

When to fish for the really big ones is a subject of much discussion.  I firmly believe that night is the right time.  The larger fish really seem to be nocturnal, probably from a defensive mechanism, and our techniques will work well in that environment.  The lack of fishing pressure is also attractive, giving you better access to desirable portions of the river.  I find the milder winter evenings to be very enjoyable, and I think you will too.  Don’t forget to take time to enjoy your surroundings, from the splash of an otter to the blazing trail of a shooting star, or the glow of a rising moon.

The casual angler will approach a stretch of water with the standard techniques, and perhaps do quite well in terms of quantity of fish taken.  Our angler in search of the very largest fish, however, will employ different techniques, designed to explore areas of the stream, as described above, that will likely hold trophy size fish.

From a practical and a safety standpoint, take time to learn about the water you are going to fish at night, before it gets dark.  Doing so will help you to understand the water and the habitat, and help you to plan your night fishing.  Plan a day trip to your desired stretch of water, and do some fishing while observing the habitat for signs of large fish cover.  While wading is possible most of the year, winter will be a better time due to less generation.  In summer, under normal conditions, your best bet is from a boat, except for the coveted periods of no overnight generation.

I’ll leave you with three suggestions

/TF
Posted by Trent Fleming at 8:14 AM No comments: