A Flood of Blessings

This late winter of 2019 the Mid-South is experiencing extensive flooding. In some areas it has been a couple of decades since water was this high.  In other areas, the more recent 2011 flooding is plainly recalled plainly by residents and farmers. Many of you know I’m a weather watcher.  OK, weather geek.  So I might listen to NOAA weather radio a little more than the average person.  There is a litany of flood reports, watches, and warnings these days.  Occasionally you will hear the phrase “unprotected farm land is flooded.”

It occurs to me that we only associate negative things with flooding, yet the existence of our agricultural economy has the recurring flooding of Ol' Man River and his tributaries to thank.  The deep, alluvial soil that willingly hosts the crop a farmer seeds into it is a result of these cyclical floods.  Don’t get me wrong - I keenly understand the impact on those whose homes, businesses and farms are impacted by floodwater, and on those who are unable to travel or work. But that same flooding is tied to the success of the region.

Since the Mid-South was “discovered by Europeans” there are two major natural forces that have shaped it:  earthquakes and flooding.  More on the 1811-12 earthquakes another time.  The region has a love hate relationship with flooding and flood control.  In the first third of the twentieth century, including 1912, 1913, and 1927 serious floods made it obvious that a growing population could not permanently settle this region without somehow managing flood waters.

Thus, in the 1930s, the Corps of Engineers began to build levees, locks, dams, and other flood control structures designed to manage flood waters and protect homes, businesses, and farms from the worst of the flooding.  Note: In this blog in January I posted a review of two excellent books on the subject of the Mississippi River and flood control, which I commend to you now as excellent resources.

Gradually, most of the flooding was brought under control, but occasionally (such as 1973 and 2011) things still get out of hand.  Flood control structures are often a two edged sword: pumping stations designed to prevent backwater flooding on tributaries also limit the ability of fish to travel up and down those streams.  As a result, many larger fish no longer inhabit the smaller tributaries.   In the time of logging in the region, late 1800s, rafts of logs and the occasional steamboat plied the White River and the St Francis River. While few tributaries are navigable anymore there are still reminders of those days in the form of high-peaked bridges or lock and dam combinations. More exotic structures, such as the siphons near Marked Tree, Arkansas remain in place to assist in controlling flooding, as they alter the waters of the St Francis and the streams that contribute to its flow.

The next time you see flooded farm land  remember that the river giveth, and the river taketh away.
Posted by Trent Fleming at 6:58 AM 2 comments:

Several years ago, I read an excellent book on the epic flooding of the Mississippi River system in the first half of the 20th century: Rising Tide by John M. Barry.  This book looks into multiple facets of addressing the problem of flooding, including hydrologic, engineering, sociological, and political issues that swirled around each time another flood devastated the land.  The 1927 flood was incredible in its scope and destruction, of course, and many other books have been written about it.  At the suggest of a friend, I just finished “Deep’n as it Come” by Pete Daniel.  Daniel looks carefully at the 1927 flood from a personal level, as well as from the perspective of the relief effort, and political response.  There are many eyewitness accounts, as well as an excellent selection of photographs that serve to give some framework to the extent of the damage the flooding caused.  Especially if you live in or near the lower Mississippi River valley, both of these books will help you to understand just how important today’s flood control structures are to the life we lead in this area. Both books are available on Amazon or virtually any of your favorite booksellers.  Highly recommended. 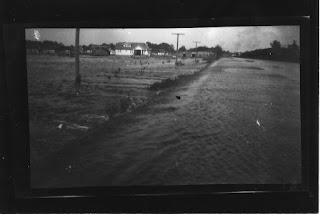 This photo is of Marked Tree, Arkansas (my home town) from the 1927 flood, looking down Frisco Street towards town. The RR tracks are on your right. The white house in the foreground is the "Brigance" house, and the garage further back is Burton's. In  1927, Frisco street was still considered part of the Ozark Trail.  From my Grandmother Nola Fleming's collection.
Posted by Trent Fleming at 3:49 PM No comments: